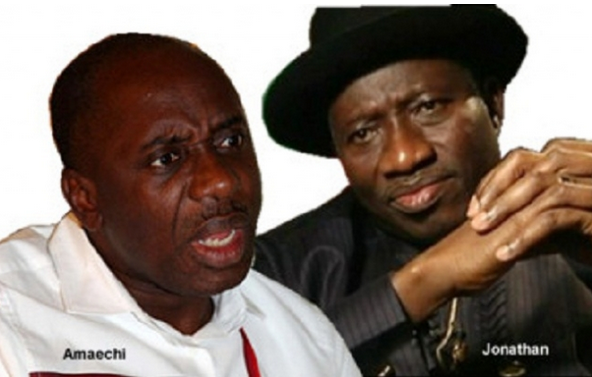 A source at the meeting the President had with the governors elected on the platform of the Peoples Democratic Party  at the Presidential Villa, Abuja, on Tuesday night, disclosed this to our correspondent.

Going by the tune of the meeting, the source said the President might initiate a meeting with Amaechi soon.

The source, who is close to the President,said that the President was asked to make peace with anyone capable of helping him to win the 2015 presidential election.

This, he said, was one of the decisions reached at the meeting between the PDP governors and the President.

The source, who was one of the governors at the meeting, told our correspondent that the expected meeting with Amaechi might start with the leadership of the party.

“The President, at the meeting, was made to know that there is crisis in the party and that we need to work harder if we are dreaming of winning the 2015 elections,” the governor added.

Meanwhile, there were indications  that governors elected on the platform of the PDP aided the removal of the Commissioner of Police in charge of Rivers State, Mr. Joseph Mbu.

Investigations showed that the governors at their meeting with Jonathan in Abuja on Tuesday night, advised the President to give approval for the redeployment of the controversial CP.

The meeting was held at the Presidential Villa.

The governor said that it was difficult for them to convince the President to redeploy Mbu.

The governor said that they told the President that it would be wrong for him(the President) to give the country the impression that only a commissioner of police was capable of working for him among the entire police force in the country.

He said, “ It was difficult for us to convince the President about the need to transfer Mbu. He felt it was not right doing so, saying it could also confirm some people’s belief that he does not stand by those who work for him.”

Asked why the CP was not posted to another state, he said none of the governors at the meeting agreed to accept him.

Besides, he said that “we felt that any state he (Mbu) is posted to will have the feeling that he is coming to wreck havoc.”

He said this could be the reason why the CP was redeployed to Abuja, which he said, was considered  to be a neutral ground.