Slipping away by the second, she lies cradled in the arms of the motorbike rider who faces a desperate – and ultimately futile – race against time to save her life. 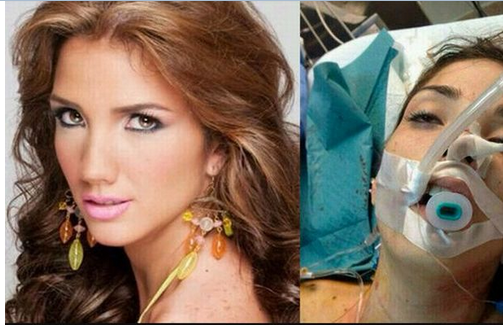 Moments earlier, Genesis Carmona had been an ordinary 22-year-old woman on a street in the Venezuelan city of Valencia.

Then she was shot in the head by an unidentified gunman who opened fire at anti-government protesters.

Miss Carmona, a marketing student and beauty queen, slumped to the ground.

A bystander scooped her up in his arms and put her on his motorbike.

But despite rushing her to hospital for emergency surgery, doctors were unable to save her life. Last night Miss Carmona’s family were in shock.

“How long are we going to live like this? How long do we have to tolerate this pressure, with them killing us?” a relative said.

“She only needed one more semester to graduate,” he added.

Miss Carmona, a professional model who won the title of Miss Tourism in her home state of Carabobo, was the most high-profile victim to date of violence in Venezuela.

So far, five people have been killed in the demonstrations, sparked by opposition politicians with protestors demanding better security, an end to goods shortages and protected freedom of speech.

The Venezuelan opposition has blamed the deaths and injuries on armed government loyalists whom they allege are firing into crowds, at anti-government rallies.

The death of Carmona comes just over a month after a former Miss Venezuela, Monica Spear, was murdered together with her British husband in the street.

It also comes as Venezuelan opposition leader Leopoldo Lopez waits to learn if he will be charged for violence that has erupted during protests that have revitalized challenges to 15 years of socialist rule in the oil-rich nation.

Lopez was due to appear before a judge in a closed hearing a day after dramatically surrendering to authorities before thousands of cheering supporters Tuesday.

He was expected to learn what charges he would face for organizing mass demonstrations that have resulted in at least six deaths and more than 100 injuries over the past week.

The government of President Nicolas Maduro has accused Lopez, a 42-year-old former mayor and the leader of the Popular Will party, of attempting to foment a coup in the South American nation and authorities had said he could face charges that include homicide and causing grievous bodily harm.

A judicial official told The Associated Press that prosecutors were leaning toward discarding homicide and terrorism charges, opting instead to pursue less serious counts such as arson and incitement to commit crimes