Police had to rescue a worried David Beckham from a mob of thousands of fans yesterday as Goldenballs-mania swept Miami. 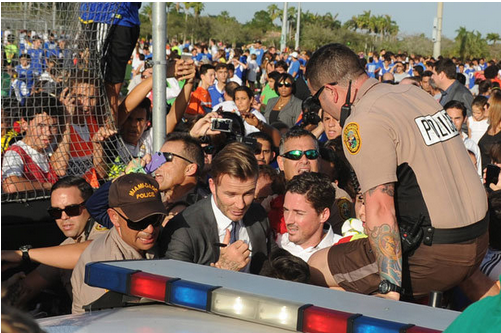 The England legend planned to watch youngsters play after announcing he’s setting up his own professional team there.

But police formed a protective ring around him as it descended into chaos.

Then they whisked 38-year-old Becks to a waiting car amid fears of a deadly crush.

Local youth coach Luis Coronado said: “Unfortunately the kids got disappointed because they wanted to see Beckham. It was chaos.”

Becks sent Miami into a spin with plans to build a stadium on the city’s seafront and bring top players to the US league.

Ladbrokes have his ex-teammate Paul Scholes 8-1 to be coach and his 14-year-old son Brooklyn 2-1 to play for the team.

Beckham said: “Who wouldn’t want to play in Miami? I’m getting messages asking, ‘When is it happening?’”