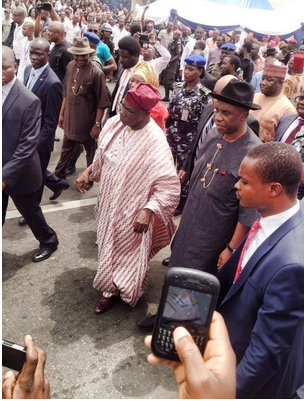 He arrived at about 11.05 a.m. in a private jet for a two-day visit. As previously reported, its main aim is to commission some projects executed by the Governor of Rivers State, Chibuike Rotimi Amaechi, and his administration.

Shortly, after the airport formalities were over, Obasanjo drove in a convoy with the Governor.

Members of the various communities, where Obasanjo would commission projects, lined up the routes of the convoy, causing heavy vehicular traffic.

Serious traffic jam was also nourished by tight security measures, as armed forces personnel and the police were deployed all over.

In addition to the Airforce bridge is the Eliozu bridge. The road is very vital because it eases traffic from Airforce base, Port Harcourt Aba Expressway and the late Ken Saro-Wiwa road to Rukpokwu, Rumuokoro, East-West road and Airport road.

Other projects to be commissioned include the popular Songhai Integrated Farm at Bunu-Tai, Ogoniland; Afam Power Station in Afam; Buguma Fish Farm and about 300 primary and secondary schools and health centres.

It would be noted that Obasanjo was invited to commission the projects because during the Port Harcourt centenary celebration President Goodluck Jonathan was invited but he has never shown up.

Instead, President Jonathan sent one of his Special Advisers, Oronto Dauglas, not even a member of his cabinet, to represent him.

Former Head of State General Yakubu Gowon (retd) expressed regrets that Jonathan did not honour the invitation because he would have used the opportunity to broker peace between him and Amaechi.