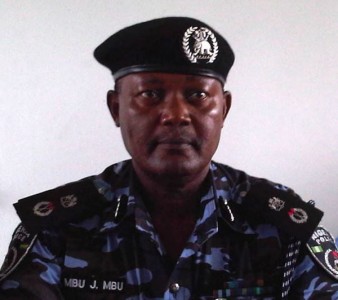 Controversial former police commissioner in Rivers State, Mbu Joseph Mbu said yesterday that many people misunderstood him because of his inability to tolerate any disrespect to the Force.

Mbu, whose tenure as head of the Rivers police command was marred by accusations of bias and unprofessionalism, insisted that his pedigree could attest to the fact that he is an agent of peace because he cannot encourage evil.

He spoke yesterday at the inauguration of a four-bedroom apartment at Rumuepirikon Police Station, Rumueme, Port Harcourt, the state capital, a project he described as a befitting parting gift.

The ex-Rivers police boss, who was recently transferred from the state to the FCT police command, also added that his one year stint in the oil-rich state has brought reformation and change to the state.

He said: “When I was posted here, there was a lot of indiscipline among officers but I showed them the other side of me.

“There were few rifles and ammunitions but today everything has changed.

“We even have enough teargas for those who want to cause trouble in the state.

“I am not a bad man as people think. I am a good man. Those who said I’m wicked have hidden agendas, which I did not allow them carry out.

“I am not bothered if somebody says I am bad, because I have over 90 per cent of people saying I’m good”.

Expressing his appreciation to the Divisional Police Officer (DPO) of Rumuepirikom, Martha Idiong, the first woman DPO of the station for her sterling performance, Mbu noted that all the women he promoted as DPO are doing well and making him proud.

“When I was posted to this state, I met only two women as DPOs but I added five and all of them are doing well.

“They have showed me that women are equal to the task; the most important thing is that I am happy because they didn’t disappoint me”.