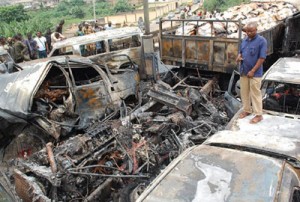 The FRSC in Osun on Monday said 213 deaths were recorded from road traffic crashes in the state between January and December 2013.

The figure was disclosed by the state Sector Commander, Mr Muhammed Husaini, in an interview with the News Agency of Nigeria (NAN) in Osogbo.

According to Husaini, 288 crashes occurred in the state within the period under review while 1,341 persons were involved.

He attributed the crashes to over speeding and the poor condition of roads, adding that the state government was redressing the situation through road construction and rehabilitation.

The FRSC boss, however, called on motorists to observe road safety rules, saying the commission was determined to secure lives on the roads.

He vowed that any one caught violating road traffic rules would be apprehended and prosecuted. [NAN]