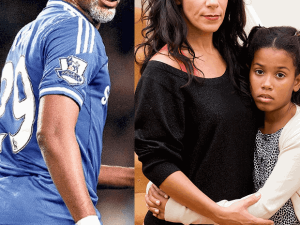 The ex-girlfriend of Samuel Eto’o has weighed in on the furor regarding the age of the Chelsea striker, claiming he is actually 39.

There has been rumors of a bust-up between the Cameroon striker and Stamford Bridge boss Jose Mourinho after the Portuguese coach was overheard joking about his age.

The player’s ex, 43-year old Anna Barranca, who now works a part-time job at a store that sells hair extensions, has now weighed in; telling The Sun that the forward is not 32.

“It was evident Samuel was older than the age he said he was when he first came to Europe. I think Samuel is not 35 he is more 39. Samuel was born in 1974 and so that makes him 39 now.”

She also claimed Eto’o has abandoned her and his daughter who was conceived about 11 years ago.