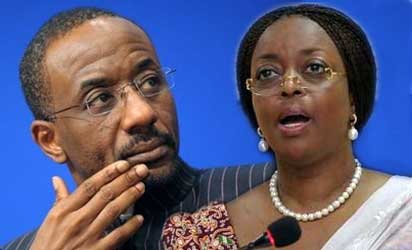 Senators under the platform of the All Progressives Congress, APC, have declared the suspension of the Central Bank Nigeria (CBN) Governor, Malam Sanusi Lamido by President Goodluck Jonathan as illegal and unconstitutional.

The APC Senators noted that they have started compiling all the constitutional breaches and flagrant violations of the laws by President Jonathan, which their lawyers were examining for appropriate and necessary action.

While questioning the reason adduced by the presidency for suspending Sanusi, they (APC Senators) said if the president took the issue of financial recklessness seriously, he ought to have also fired the Minister of Petroleum Resources, Mrs. Diezani Alison-Madueke.

The APC Senators through the Minority Leader, George Akume in a statement on Friday, had flayed the suspension of the CBN governor alleging that the development was inimical to good governance and the rule of law.

According to the statement, “The nation has yet again been confronted with another act by   the President, which is inimical to good governance and the rule of law with the illegal suspension from office of the Governor of Central Bank, Malam Sanusi Lamido Sanusi.

“While one may not question the prerogative of Mr. President to hire and fire, such actions must be guided by strict observance to laid down processes and in the overriding national interest.

“The suspension of the CBN Governor has raised more questions than it addresses the issue of good governance, accountability and the fight against corruption, especially, coming at a time when there are unresolved issues in the petroleum industry, which is known locally and internationally as a cesspool of corruption.

“The whistle blower who should know it all is being illegally and unconstitutionally suspended to safeguard and protect the perpetrators of corruption in the petroleum industry.

“Now that the President has acted illegally and unconstitutionally, he should also now act legally and constitutionally by firing the Petroleum Minister and the top management of the NNPC to restore confidence in the sector.

“The President has serially violated the Nigerian   Constitution, which he swore to uphold. The consequences of these are grievous. The suspension of the CBN Governor by the President is not only an abuse of power but also a gross violation of the Central Bank Act, 2007.

“Under the provisions of Section 11(2) (f) of the CBN Act, the President can only remove the CBN Governor where his request is   supported by two-thirds majority of the Senate of the Federal Republic of Nigeria.

“We condemn in very strong terms this very unfortunate,   unjustified, unwarranted and illegal removal of the Governor of Central Bank, Malam Sanusi Lamido Sanusi under the guise of suspension.

“The President must stop the persistent violation of Nigerian Laws and impunity in governance.

“We call for the immediate reinstatement of the Governor of the Central Bank of Nigeria, Mallam Sanusi Lamido Sanusi”, the opposition senators said.