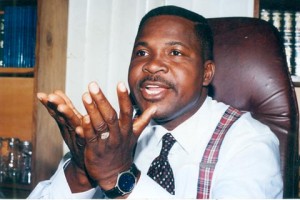 Ozekhome pointed out that the suspended governor was guilty of most of the allegations that led to his ouster.

“CBN under Sanusi also expended N1.257 billion in 2012 on private guards and lunch for policemen. CBN claimed to have paid N38.233 billion to the Nigerian Security Printing and Minting Company Ltd (NSPMC) in 2011 for the printing of bank notes, whereas the same NSPMC reported a total turnover of N29.370billion for all its transactions in the same 2011”, the lawyer said.

“Without basing it on acceptable legal mandate, prudence in spending and overriding national interest. The CBN under Sanusi is said to have either executed or is executing currently over 63 ‘intervention projects’ across Nigeria, without appropriation or authority. Sanusi approbated and reprobated, simultaneously, on many issues, blowing hot and cold at the same time.

“He violated global principles of public decorum expected of holders of such a revered office. The Governor undoubtedly deployed huge sums of money without appropriation, and without basing it on acceptable legal mandate, prudence in spending and overriding national interest”.

According to him, a Central Bank Governor is to be seen and rarely heard, if ever, except only on crucial financial, monetary and economic matters, where his public intervention is called for, with a view to strengthening the economy and increasing investors’ confidence in the economy of that country.

Ozekhome said the ousted governor played the exact opposite role, saying “he has helped, incrementally and instalmentally, to damage, if not destroy, the very fabric of confidence in the very economy he is supposed to protect. Sanusi went about recklessly making outrageous donations in billions of Naira to universities and other social causes, clearly outside the Primary mandate of the Central Bank.”