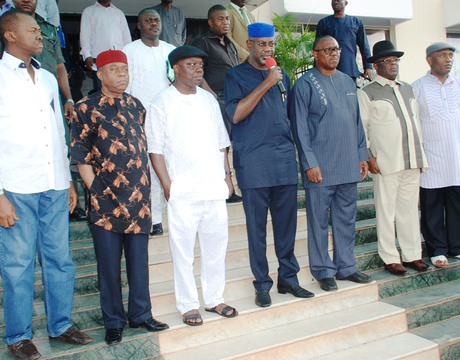 The South-East Governors Forum on Sunday in Enugu pledged to work together in order to strengthen the political relevance of the zone.

Governor Peter Obi of Anambra State made this known when he briefed newsmen after a six-hour meeting.

He said the governors had agreed to put the interest of the zone far ahead of personal interests.

“We did discuss and agree on ways to work together to strengthen the zone both at the states and federal level”, he said.

Obi, who declined disclosing other issues discussed at the meeting, said deliberations on other important issues were pending.

“The deliberations on these other issues would continue in our subsequent meetings until reasonable conclusion was reached”, he said.

The others are Minister of Health, Prof. Dr Onyebuchi Chukwu; Special Adviser to the President on Inter-Party Affairs, Senator Ben Obi, and a member of the House of Representatives, Ogbuefi Ozomgbachi. (NAN)