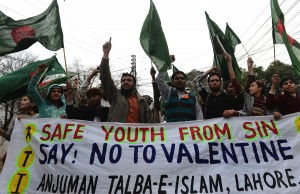 Two rival student groups have clashed at a university in the Pakistan’s northwest over Valentine’s Day celebrations, police say.

According to police official, Raheem Hussain, Friday’s violence erupted at the University of Peshawar when dozens of students from a liberal group rallied in favour of the romantic holiday.

Their rally was taking place at the same location where conservative students had gathered to promote a “Modesty Day” instead.

The Associated Press quoted Hussain as saying the rival sides threw stones at each other, and some students even fired into the air. Four people were hurt.

Geo.tv reported that the police were called in to control the situation but were also pelted with stones by angry students. They also said there were some reports of the students firing at the police.

Pakistan’s DawnNews also reported that the clash led to vandalising of campus property when some group members set alight six hostel rooms. A fire brigade reached the university to stop the fire from spreading.

DawnNews further said that a case was registered against five students and that campus police have begun procedures to issue arrests.

Conservatives in Pakistan every year call for people to boycott Valentine’s Day, saying it is a Western-inspired event that spreads vulgarity.

But the holiday is still widely celebrated in Pakistan where people buy flowers, pink teddy bears and heart-shaped balloons. [AlJazeera]