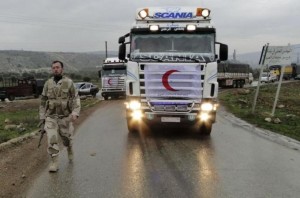 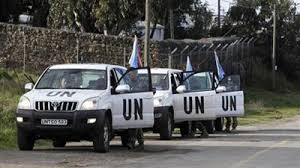 An aid convoy has come under attack in the besieged Syrian city of Homs, threatening a UN-led operation to bring food and medicine to 2,500 people and evacuate civilians trapped by fighting between rebels and government forces.

Saturday’s violence threatens to unravel a humanitarian deal for Homs which was the first concrete result of talks launched two weeks ago in the Swiss city of Geneva to try to end Syria’s civil war.

The Syrian Arab Red Crescent said mortar bombs landed close to its convoy and shots were fired at its lorries, wounding one of its drivers.

At least nine Red Crescent and UN vehicles were trapped in Homs for several hours after dark when the explosions struck, but the team managed to leave shortly before 10pm local time (20:00 GMT), leaving two damaged lorries.

“Although the team was shelled and fired upon, we managed to deliver 250 food parcels [and] 190 hygiene kits and chronic disease medicines,” the Red Crescent said.

The aid had been held up for months in a UN warehouse in a nearby government-controlled area.

The UN says it wants to distribute food for 2,500 people, along with medical kits, bedding, cash and other support for those leaving or those choosing to stay in the Old City.

Talal al-Barazi, the governor of Homs, told the state news agency SANA that aid was distributed to two neighbourhoods, Bustan al-Diwan and Hamidiyeh.

A man with a blood on his face was led into a nearby building, before a blast struck on the far side of the vehicle. It was not clear how much damage it caused.

The UK-based Syrian Observatory for Human Rights said five people, including two rebel fighters, were killed and 20 wounded by mortar bombs in the Old City of Homs.

Sunday is due to be the final day of a three-day ceasefire which Russia, a close supporter of President Bashar al-Assad, said had been agreed to allow the aid to be brought in and civilians moved out.