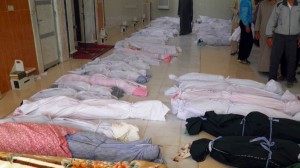 Syrian army troops have killed 175 opposition fighters, many of them linked to al-Qaeda-linked groups, in an ambush described as one of the deadliest attacks by government forces near Damascus, according to state media.

An opposition group alleged that Wednesday dawn’s ambush was carried out by the Lebanese Hezbollah group, which has been instrumental in helping President Bashar al-Assad’s regime push back rebels entrenched in the suburbs of the Syrian capital.

Syrian state news agency SANA quoted a field commander in the Eastern Ghouta area as saying most of the rebels killed in the assault near Oteibah lake, southeast of Damascus, belonged to the al-Qaeda-linked Nusra Front.

The report claimed several of those killed were foreign fighters who came to Syria from Saudi Arabia, Chechnya and Qatar.

The agency posted several photographs on its website showing dozens of bodies of men, some with leg wounds, lying in a dirt track of an open field.

Some were wearing fatigues, but most wore civilian clothes and appeared to have been carrying bags of clothes and bottles of water that were scattered on the ground.

Activists told Al Jazeera the fighters were killed while trying to cross from the eastern side of Damascus to Adra, north of the city, using “a risky road” because of an ongoing government siege.

The Britain-based Syrian Observatory for Human Rights said at least 152 opposition fighters were killed, most of them Nusra Front and other fighters from allied brigades.

Reinforcing that report, Hezbollah’s Al-Manar TV aired exclusive footage of what it said was the ambush, showing at least two large bombs that were detonated along the route used by the opposition fighters.

An army colonel told the Lebanon-based Al-Mayadeen channel that his troops acted on intelligence and the rebels lost “more than 150 men”.

Syria’s pro-government Al-Ikhbariya channel aired its own footage of the aftermath, showing soldiers milling about as dozens of bodies of rebels lay scattered on the ground.

The station also broadcast images of what it said were rebels’ weapons, confiscated by the army.