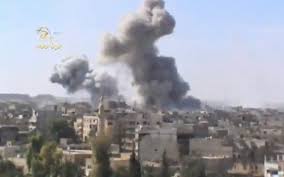 The Syrian Observatory for Human Rights also said that in the northeast, Kurdish fighters seized the town of Tal Barak from jihadists.

Regime forces launched a new wave of aerial and tank bombardment in and around Yabrud, the main town in the Qalamun mountain range and with a mixed Muslim and Christian population, two weeks into a campaign aimed at seizing it from rebels.

The Britain-based Observatory said Saturday’s attacks targeted several mountainous areas around Yabrud as well as the town itself, which was once home to some 50,000 people.

Because of the violence, some “12,800 people” have fled across the border into the Lebanese town of Arsal in just 12 days, the UNHCR estimates.

Shiite forces from Lebanon’s Hezbollah movement are supporting the regular Syrian army in Qalamun. Hezbollah says most of the vehicles used in car bombings of its Lebanon strongholds came from Yabrud.

“Hezbollah is fighting to close off the border, while the army wants to secure control of the international highway” linking Damascus and the central city of Homs, an activist in Qalamun told AFP by Skype.

Calling himself Amer, he said he believed the bombing had intensified as the army and Hezbollah “fail to make the advance on the ground they want. So they are besieging and punishing Yabrud”.

In northeast Damascus, fresh fighting raged in Jubar district, one of the areas hit by an August chemical weapons attack, that was followed by a UN Security Council resolution ordering the destruction of Syria’s chemical arsenal.

Most of Jubar is under rebel control, and it has seen a massive escalation of fighting since February 9 as the army seeks to crush resistance there, the Observatory said.

Meanwhile, Kurds in the northeast battling the jihadist Islamic State of Iraq and the Levant seized Tal Barak town between the main Kurdish cities of Qamishli and Hasakeh.

Fighting over the town killed 25 gunmen, 22 of them ISIL members, from late Friday through dawn Saturday, said the Observatory.

Kurds have fought ISIL for many months in majority Kurdish areas, which the jihadists want to take over because of their resources and strategic location next to Iraq and Turkey.

The army’s use of such bombs has been widely condemned as “indiscriminate”.

More than 140,000 people have been killed in Syria’s nearly three-year war, and millions more have been forced to flee their homes. [AFP]