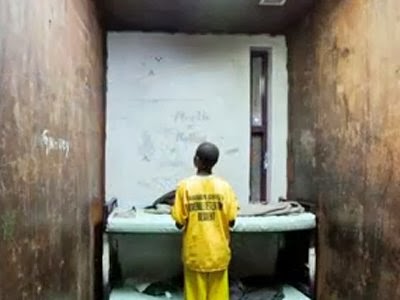 I got an email from a LIB reader who claims he was recently locked up at a police station called Iyaganku Police Station in Ibadan. While there, he says he saw two boys less than 16 years old who have been locked up there for a few years. I decided to share his mail here just in case. See it below
Hi Linda, I am writing you regarding something I saw some days back in Iyaganku Police Station Ibadan. I was detained by some Policemen of Iyaganku in Ibadan, after which I was put in the cell because I wont co-operate with them. Surprisingly, a boy of about 13-14yrs old came out of one of the cells, I wasn’t sure of what I saw because its awkward to find someone so young in a cell, I believe for whatever crime he must have commited, he shouldn’t be locked up in a cell, so when I got into my own cell, where I met about 6 other people in the cell, I told them what I saw and to my surprised they weren’t shocked, they told me, its no news that the boy is called “State” and he’s been locked in that same Iyaganku Cell for over 5yrs, with my calculation, the boy is 14yrs old now, that means he’s been locked up since he’s 9, when I asked for his crime, I was told he is locked up there because he pushed someone into a well and the person died. Continue…

My Point is this, yeah, the boy committed a crime, but at 9, and this crime is not even something that he must have done intentionally, even if he did intentionally, that is no reason why he should be locked up in a cell for 24hrs let alone 5yrs. My reason for writing you is because I cant bring the boy out of the cell, but I know the media can, that is why I am writing you if there is any human Right Activist you can talk to about this, or if there is something you can do to get the boy his freedom.

Please and Please. I left Iyaganku that same day but I couldn’t sleep well because I know what I saw is not right and I shouldn’t just be silent about it.

I would speak to as many people as possible of which you are the fourth person I am writing to about it. I am hoping something would happen soon.

Thanks and I hope you do something about it.