Teniola Opens Up: “Yes, I am pregnant for Tuface Idibia” 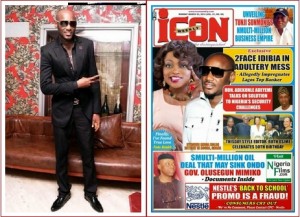 While 2face Idibia and his wife Annie are trying hard to deny the story that he has put his account officer in the family way, the lady has finally broken her silence, revealing all that happened between she and 2face.

Her name is Teniola and she is a big girl in one of the top banks in Lagos.

She claims 2face has been enjoying her secretly for sometime now until the “rough play” resulted in pregnancy and he started asking her to go in for an abortion but she refused.

She said the story was leaked to the media so as to protect her life and decided to speak after Annie tried to defend 2face.

In the words of Teniola: “My name is Teniola. Please I want my privacy kept secret. I just want to respond to Tuface’s denial of my pregnancy. I‘m 3.5 month pregnant for him and he is fully aware of it. His recent denial is to appease his wife and I understand that… “Note, I didn’t receive any money from the magazine that published my story. My elder sister took my story there to draw public attention incase something bad happen to me. And I’m not really happy about it. Please I want privacy for myself and my unborn child.”

In his earlier reaction, 2face had claimed that the story is false and that if he impregnated any lady he would be the first to tell the media.

On her part, Annie Idibia said those who wrote it want to spoil her happiness.

Now that Teniola has finally come out to speak by herself, it’s believed that 2face may decide go and do the honorable thing then keep quiet and take care of his unborn baby mama.

Share
Facebook
Twitter
WhatsApp
Previous article2Face Reacts To Reports That He Impregnated His Account Officer
Next articleSEE The Bad Things This Woman Is Doing With Her Son
- Advertisement -Ad ==> Discover how a young Nigerian graduate now makes a consistent 40k per week doing a legitimate online business. You too can start yours now, click here!!!