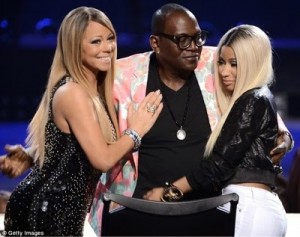 They clashed so much on American Idol that it was painful to watch, and neither Mariah Carey nor Nicki Minaj was invited back to the judging panel of the show.
And the rivalry between the two singers isn’t showing any signs of dying down even now.
Mariah and Nicki both released their new songs and music videos on Wednesday, and Mariah used the opportunity to slam the rapper.
Mariah was spotted out in New York on Wednesday while promoting her new single
Still feuding: On Wednesday Mariah Carey slammed Nicki Minaj, who she starred with as a judge on American Idol. The pair, who famously clashed on the show, are pictured with Randy Jackon during the May 2013 finale.
The diva, who is 43, was promoting her new track You’re Mine (Eternal) on radio show, where she was asked about Idol.
‘I was a professional on that show, and that’s all I have to say,’ Mariah said. ‘I was a complete professional.’
One host chimed in: ‘Nicki was late though,’ which led Mariah to deliver the cutting comment: ‘Who?’