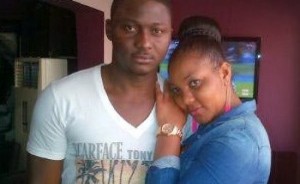 Uche Iwuji has been celebrating her separation from her husband Juwon Lawal all-over social media.. However Encomium magazine claims the reason for the break-up was infidelity on her part..,

“On Friday, November 16, 2012, when the estranged couple said ‘I do’ to each other, little did they know that the boat of their romance would capsize so soon.  But to the surprise of many within and outside the industry, months after, rumour mills were agog that the hitherto Romeo and Juliet had gone their separate ways on account of infidelity on the side of Iwuji, linking her to a bank MD.

According to an industry source, the real reason the relationship went sour was largely due to the alleged romance between Iwuji and the top banker.

“I learnt that when Juwon got a wind of the rumour of his wife’s romance with her banker lover, he couldn’t believe it because just last year, he bought a car worth N4m for her.  So, what’s her problem?  But when the guy returned from Europe, he found a lot of dirty and implicating text messages of the man in Iwuji’s mobile phone.  I learnt all explanations by Iwuji fell on Juwon’s deaf ears.  He just decided to call it quits with her.”