This 10-year-old Boy Has No Arms, So He’s Learned to Play The Trumpet With His Feet 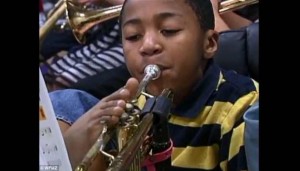 This is Jahmir Wallace, a pretty amazing ten-year-old from Phillipsburg, New Jersey.

He was born without arms, so he when he decided to take up the trumpet, he had to learn to play with his toes.

And as the video above shows, he’s become pretty good at it already.

‘My older sister used to play the piano, so I decided maybe I should try to play an instrument,’ he says.

Remembering the first note he ever played on the trumpet – just four months ago -, he adds: ‘I kind of felt excited. I kind of felt like, “Oh man, this is comfortable. This might be the one for me”.’

One observer said of Jahmir’s talent: ‘To see how he moves his toes like we move our fingers – it’s amazing.’

As for Jahmir’s message to others, he says: ‘Anybody out there who would like to try an instrument, go ahead and try it. You never know what will happen. If you like it, you like it. If you don’t, you don’t. Just keep on trying.’