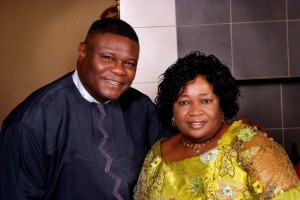 Bishop Mike Okonkwo is the presiding pastor of The Redeemed Evangelical Mission (TREM) and he is married to Bishop Peace.

How long have you been married?
Mike: This is our 34th year. We got married in 1980.
When and where did you meet?
Mike: We met in the church, at the United Church of Christ. It was at the youth fellowship.

Was there any opposition when you wanted to marry her?