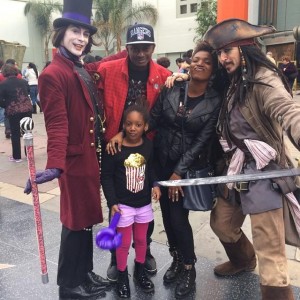 The expectant mother and baby mama of 2face Idibia — Sumbo has shown that she has no hard feelings even though 2face ditched her for Annie.

Apparently, she is in good support of a cordial relationship with her boys step mum.

Sumbo came across photos of Annie, her daughter Isabel and Tuface’s younger brother, Charles as they were having fun at the Hollywood walk of fame in Los Angeles, California and sent a message on Twitter saying they all looked good.

Tuface responded to her message by saying ‘I see you.’ Sumbo has two sons for Tuface Idibia.