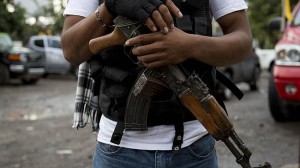 Two severed heads were left in front of a bank in a town in Mexico’s west with a chilling sign: “for all those who switched sides”.

The heads were left outside a bank in Paracuaro, in the state of Michoacán, a volatile region where President Enrique Pena Nieto is to visit sometime this week, CNBC reported.


The two murders are believed to have been carried out by members of the Knights Templar cartel to try to stop informants.

It is reported that the Knights Templar cartel has expanded from drug trafficking and extortion to smuggling iron ore into China and vigilantes had taken into their own hands to fight their increasing influence.

“We always took for granted that this kind of thing would happen – it’s a complex conflict,” said the official, referring to the severed heads, a gruesome tactic used by drug lords in the past to send warnings.

The government last week reported skirmishes with armed men and the capture of an arms haul, a safe, and drugs as well as the destruction of a drugs lab and marijuana plantations.