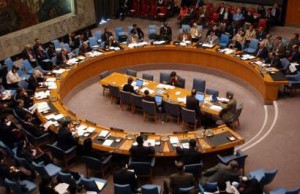 The UN Security Council has adopted a unanimous but non-binding resolution, calling for humanitarian aid convoys to be allowed access across war-torn Syria, but diplomats immediately voiced doubt about its effectiveness.

Syria’s staunch ally Russia, with support from China, has blocked three previous resolutions aimed at pressuring the Damascus regime since the crisis began in March 2011, with an estimated half of all Syrians urgently awaiting immediate help.

But Moscow and Beijing, two of the five permanent Security Council members, did not do so this time, sending a strong message to President Bashar al-Assad, whose regime is accused of serious rights violations in attempting to hold on to power.

The resolution does not threaten sanctions but it does express the council’s intention to take “further steps” if the resolution is not implemented.

The government and rebels hold several areas in the country under siege, leaving tens of thousands of people suffering from lack of food and medicine.

UN Secretary-General Ban Ki-moon welcomed the move, but said the resolution “should not have been necessary”.

“Profoundly shocking to me is that both sides are besieging civilians as a tactic of war.

Ban added: “If this resolution is implemented quickly and in good faith, at least some of the suffering can be eased.”

Speaking at the UN, Syrian Ambassador Bashar Jaafari said that the Syrian government had always welcomed efforts to improve the humanitarian situation in the country.

“Recently a number of conciliation processes have been carried out, sending a message to the world that Syrians can settle their differences among themselves.” he said.