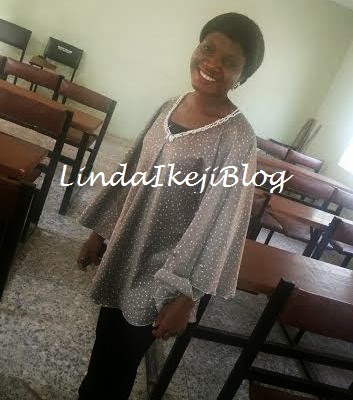 27 year old Taiwo Omolara Shittu (pictured above), a 500l student of the Department of Aquaculture and Fisheries Management, University of Ibadan, was attacked and killed on the 19th of February at her sister’s home at Opeyemi street, Gbagi in Ibadan.Her sister, who she lived with, returned home from work around 5:30pm on Wednesday to find Taiwo in the pool of her own blood, her pánts down to her ankle, and a machete stained with blood on the bed. Taiwo had been attacked with the machete as there was an opening on her head.
A man who cuts grass for her sister has been arrested and is currently being held at Alakia Adenubi police station in Ibadan. The man, said to be in his early 30s, has denied any involvement in the murder but it was the machete he uses to cut grass that was found in the crime scene.The case has been transferred to the State CID. As soon as I get more updates from late Taiwo’s family, I will update you guys. So sad. May her soul rest in peace..amen.