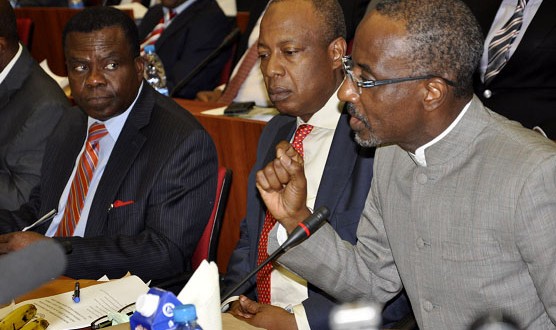 The Central Bank of Nigeria Governor, Mr. Lamido Sanusi, on Tuesday informed the Ahmed Makarfi-led Senate Committee on Finance that the Nigerian National Petroleum Corporation, NNPC, had yet to remit to the Federation Account, a sum of $20bn out of the $67bn crude it sold on behalf of the Federal Government.

The committee is investigating the alleged $49bn missing crude oil proceeds from the federation account, which was also exposed by the CBN governor.

Sanusi in his latest expose also explained that he had submitted a 20-page written document backed up with another 30-page appendix to prove his point.

But Senator Makarfi cautioned Mr. Sanusi against making wild and unsubstantiated allegations without having concrete and specific figures to back up his claims.

The CBN boss told the committee that certain level of reconciliation had been achieved between the apex bank, the NNPC and other relevant government agencies since the alleged missing fund became public knowledge.

He said, “The NNPC did a presentation. We have all agreed earlier that $14bn out of the $67bn dollars they shipped came in to the dollar account of the federation. That is agreed.

“We have looked at the Federal Inland Revenue Service numbers and we have confirmed that $16bn paid by international oil companies to the FIRS account was not paid by the NNPC but paid by IOCs.

“It was the proceeds of crude lifted in the name of NNPC but sold on behalf of FIRS. That $16bn had been confirmed by FIRS and had accepted. There is $1.6bn dollars that the Department of Petroleum Resources also received from IOCs which was part of that crude and which CBN had accepted.

“We have provided evidence in the naira crude account out of the $28bn domestic crude shipped by the NNPC, it had repartriated $16bn. Out of the $67bn that has acrued to the NNPC account we have accounted for $47bn.

“That is, out of the $67 bn dollars that the NNPC shipped, $47bn had been repatriated to the CBN. What we are talking about is the balance of the $20bn and what explanations had been given”.

The CBN governor, who is due for retirement in June, told the committee that the NNPC had said some of it does not belong to the federation account, but that it had established that some of the crude shipped by the NNPC was from oil wells that belonged to the federation.

He also accused the NPDC of transferring revenues that should go to the federation account for remittance.

He added, “I have given free legal opinion to this committee, on the unconstitutionality and illegality of that transaction. Secondly, NNPC had explained that 80 percent of that money yet to be repatriated, on kerosene and fuel subsidy.

“I have submitted to this committee, written evidence of a presidential directive eliminating subsidy since 2009, and NNPC needs to provide its authority for buying kerosene at N150 and from the federation account and selling at N40 and inflicting that loss on the federation.

“NNPC had also said that it is DPR but for us in the CBN, every month, NNPC sends report for the FAAC. And every month NNPC indicates how much it has deducted as PMS subsidy.

“From April 2012 to date, NNPC had submitted reports to the FAAC consistently showing it is deducting nothing from PMS so we are surprised that having submitted nil returns since April 2012 we are now being told now that deductions were being made.

“I don’t know whether they were made and whether the DPR had approved them. We are waiting for the reconciliation with the PPRA. The other part of third party financing which were not appropriated had no documentation or proofs.

“All we have said as CBN to which there is no disagreement is that NNPC shipped $67bn worth of crude they have repatriated or we have established that $47bn has come back to the federation.

“There is a $20bn that has not come back to us. The burden of proof is on NNPC We have made suggestions that can help to answer some of the explanation and we believe that even some of that which they claimed were shipped by NPDC does not belong to the NPDC but to the federation”.

But the Group Managing Director of the NNPC, Mr. Andrew Yakubu, told reporters after the committee hearing that his agency was still reconciling and that it was at the point of conclusion on the reconciliation process with the various agencies.

He said it was at the end of the process that he will submit the detailed reconcile position which the committee will study and then commence detail review.