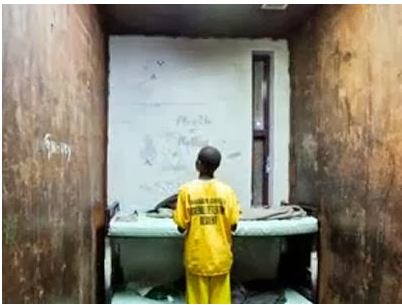 It is quite unfortunate that many people have cast aspersions on the Nigeria Police Force without caring to know what actually happened. The boy, Rilwan Olaniyi was not detained on police orders or discretion. He was detained on court order. For the avoidance of doubt, when the unfortunate crime was committed by the boy last year 2013 (not 5 years as erroneously broadcast) the aggrieved parent of the deceased through their lawyer took the case to court without recourse to the police. At the court, the case-murder, was then referred to the police for necessary action while the boy was ordered to be committed and remanded in police custody. Rilwan had on several occasions been taken to court for the hearing of the case and at the end of which there have been adjournments alongside court orders that he should be returned to police custody. There’s no juvenile remand Centre at Agodi prison. The only remand home is that which is at Ijokodo and it’s not in good condition; and not safe for the protection of this boy’s life.

At Iyaganku police station where he is, he is kept at the Children Welfare Cell, where he has access to bed, mattress, toiletries, change of clothes, bath, etc. It is worthy of mention that he has unfettered access to seeing his parents who bring food to him on daily basis and at will. His detention in police custody is also PROTECTIVE of his life. That he is standing trial of murder case, doesnt exempt him from his fundamental rights to life. Some Human Rights groups have been on his case as well. Police at Iyaganku are human beings with milk of kindness flowing thru their veins, taking care of this boy, seeing to his welfare. The attendance of rights groups to his matter is brought about by them. As at the last sitting, the presiding Judge had already taken steps on how he would be transferred to Juvenile Remand home in Ogun State.

It’s however disappointing that some pple take delight in judging, abusing and chastising the police when they are bereft of information concerning a matter. By now, they would definitely be ashamed of their folly. To us in the police, God is the ultimate judge and he shall recompense us according to our sacrifice to the Nation. I can only ask God to forgive all those who cast aspersions on us, cos they know what they do. Instead of cursing and blaming the police for even being kind to Rilwan, they should pray along with his parents, also ask God to give the parent of the deceased the fortitude to bear the loss.