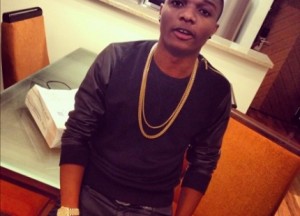 It seems these to young entertainers are still at each other’s throats.

Few days after Davido announced that he will be releasing a new single on Feb. 1st; which he eventually did; Star-Boy Wizkid has made a similar announcement today via his Twitter page.

Wizkid says he’ll be releasing a new single off his upcoming album on Valentine’s day been Feb. 14.

Aside that, the musical sensation also said that the date for the release of his much anticipated album will be announced that same day.