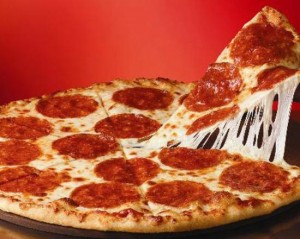 A Pizza Hut manager in Erwin, Tenn., was arrested after adding an ingredient not ordered by the customer: Spit.

Amanda Engle, 29, was nabbed on Jan. 24 for disorderly conduct after a customer noticed her hocking a loogie into the pizza he purchased, according to The Smoking Gun.

The customer just happened to be Unicoi County Sheriff’s Deputy Frank Rogers, who detailed the soggy encounter in a police report.

“I sat down on the bench which is straight in front of the counter,” he wrote, according to Al.com. “The pizza oven is directly behind the counter. As the defendant removed the pizza from the oven I observed her … look at me. The defendant then leaned over the pizza that she had begun to slice, and I observed her spit on the pizzawhich had been purchased by me.”

Rogers then asked Engle if she knew who he was, and she confessed that he arrested her last year for a DUI.

It turns out that Engle recently pleaded guilty to the charge after knowingly allowing a friend to drive her car drunk, which is also a DUI charge under Tennessee law. She spent two days in jail and paid a $350 fine, WSBT.com reported.

Rogers arrested Engle on the spit, er, spot and took her to the Unicoi County Jail where she was booked and later released on bond.

She was later terminated from her job at Pizza Hut, according to Unicoi County Sheriff Mike Hensley, who added that the department does not hold the restaurant responsible for Engle’s actions.

“We’ve patronized the Pizza Hut and will continue to patronize it,” he told the Johnson City Press. “It’s not their fault. It just boiled down to a bad employee.”