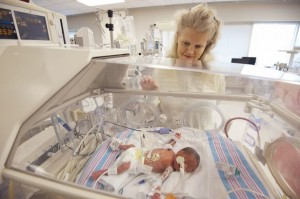 A 42-year-old woman who had just given birth to triplets got a shock when doctors noticed a FOURTH baby.

Kimberley Fugate, from Mississippi, was recovering in the delivery room after labour and a C-section.

But the respite was short-lived when she heard doctors shout: “More feet, more feet!”

The little girl had managed to remain hidden from sight when ultrasound scans were made during the pregnancy.

Kimberley and husband Craig now have four identical baby girls, who were born on February 8 at the University of Mississippi Medical Centre.

The quadruplets were born 13 weeks premature and are currently in intensive care.

Dr James Bofill said in a statement released by the medical centre the odds of spontaneous quadruplets are just 1 in 729,000.

In this case, however, the odds are even smaller because the girls are split from a single egg, which means they look exactly alike.

Dr Bofill, a professor of maternal foetal medicine, added: “The odds are incalculable.”