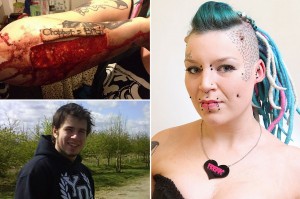 A woman took revenge on her ‘cheating’ ex-boyfriend by removing a tattoo of his name with a SCALPEL and sending the severed skin to him by post. Torz Reynolds, 26, was left infuriated after discovering her ex  Stuart “Chopper” May had been allegedly cheating on her months. She claims he lied to her that he was emigrating to Alaska for his dream job – with Ms Reynolds even seeing him off at the airport. However, a week later, she was shocked to discover from friends that Chopper was still in the UK and had allegedly shacked up with the girl that he had been having an affair with.

A furious Ms Reynolds then decided to take out her gruesome revenge. She spent an hour and a half carefully slicing the skin from her arm which had the tattoo ‘Chopper’s Bitch’  imprinted on it. She then used a pair of dissection tweezers to peel the skin back. Afterwards, the remnants of the tattoo were put in a jar, wrapped up with a bow and sent via recorded delivery to her former lover. Torz even tracked it online so she knew for definite that Chopper, 24, had received it. Torz, originally from Colchester, Essex said: “I packaged it up so it really did look like a present. I even used different handwriting so he’d have no idea that it was me. “I can’t imagine what his reaction was. I wish I could have been there to see it.”

With no anaesthetic and using only a bottle of Vasocaine numbing spray to halt the bleeding, Torz made a rectangular incision around the tattoo. Afterwards, she used the tweezers to peel back the corners. “I don’t like pain, but the skin coming off was actually quite relaxing. “It was the after-pain that hurt the most. It felt like a nasty stinging sensation and putting on clothes was a difficult task,” said Torz. “I’d always planned to send the skin to Chopper.

After I had posted it to him, I didn’t receive a response from him. “Removing the tattoo like that was definitely closure. I like to get over things quickly and I always delete someone completely out of my life.” Torz, a body piercer at the Kings Cross Tattoo Parlour, says that Chopper had seemed like ‘the perfect boyfriend’. She got the words ‘Chopper’s Bitch’ tattooed a year into their doomed relationship. “Chopper did everything for me, I never had to ask him for anything. I thought he was brilliant and so did all of my friends. “I got the tattoo of Choppper’s name done as a surprise and he was really proud of it. The inking was on my forearm so whenever I lifted my pint glass, all his mates would see it and be amazed.”

However when Torz moved to London in late 2013, she claims Chopper suddenly became distant and stopped answering her calls and messages. When she finally managed to reach him, she said Chopper claimed he had got his dream job offer to do pipeline work in Alaska and had been dreading giving the news to Torz. The couple had a tearful separation, promising to meet up again if he ever returned from Alaska.

Torz even saw him off at the airport. But a few days later, she claims mutual friends told her that Chopper had never gone to Alaska. Instead, she claims,  he was still in his hometown of Tiptree, Essex with the girl he had allegedly cheated on Torz with for over half a year. It was this revelation which prompted Torz to forcibly remove her tattoo of Chopper’s name and get vengeance on him. She explains, “Posting the tattoo to Chopper sent a clear message. Now he knows never to mess with me again.” The macabre act polarized opinion amongst Torz’s family and friends. Some found it repugnant with certain individuals falling out with her over it. Whilst others have commended Torz, expressing a desire to have their own tattoo dedicated to an ex removed. Torz reckons that people take what she did too seriously: “At the end of the day, it’s only skin and it will grow back. I’d absolutely recommend it to other people. “Laser surgery is very expensive and very painful.

This is a genuine alternative, it’s literally one hour and then you’re done.” Torz – who is now seeing someone new – is even thinking about offering a service to others who want inkings of their exes removed and sent to them in the post. She says, “I wonder how many people would go for that service. I think it could make a great business.” Stuart “Chopper” May refused to comment.