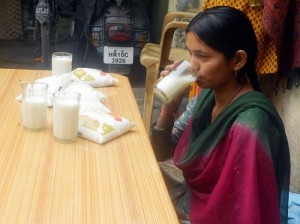 Manju Dharra, a 25-year-old Indian woman, hasn’t had a bite to eat since she was born. For the past two-and-a-half decades she has been surviving on a liquid diet consisting of milk, tea, buttermilk and water.

Manju is from a small town called Sonipat, located near India’s capital, New Delhi. She suffers from a rare condition called achalasia – a failure of smooth muscle fibers to relax. Because of this, the cardiac sphincter muscle (that closes the opening from the gullet to the stomach to prevent acid reflux) does not open at all. So food cannot pass into the stomach and the gullet is blocked. The result – violent vomiting if she ever tries to eat anything solid.

“If I eat something then I throw up and I feel very, very bad. Now I feel fear when I look at solid food,” said Manju. Her mother, Bhagwati Dharra, added: “She only takes fluids like milk, tea, water, and sometimes juice. Mostly she takes milk, tea, buttermilk, water. If she eats solid food, she faces the problem of vomiting suddenly.”

Surprisingly, Manju is above average height for an Indian woman. Even though she’s slim, she doesn’t seem weak and manages to complete household chores with ease. She does get terrible stomach aches, though.

Mrs. Dharra says that she didn’t realize anything was wrong with Manju until the girl was two years old. When she tried to introduce solid foods like rice and bread, Manju was sick and cried a lot. At first she just thought her daughter was being a fussy eater but over time, she realized that Manju might be ill.

After consulting various doctors, Manju was diagnosed with achalasia. But none of the numerous treatments she’s been through have given her any respite so far. According to Dr. Adarsh Sharma, a pediatrician from Jaipur city, the only solution is surgery, which her family cannot afford.

“Our economic situation is not such that we could continue her studies,” said Ramkanwar Dharra, Manju’s father, a bricklayer by profession. Manju lives with her parents, two brothers and five sisters. The rest of the family is healthy, none of them suffer from this condition.

Although Manju’s parents are unable to afford the required treatment, they’ve made temporary arrangements to suit her needs. They’ve bought her a cow, to provide her with the four to five liters of milk that she consumes every day.