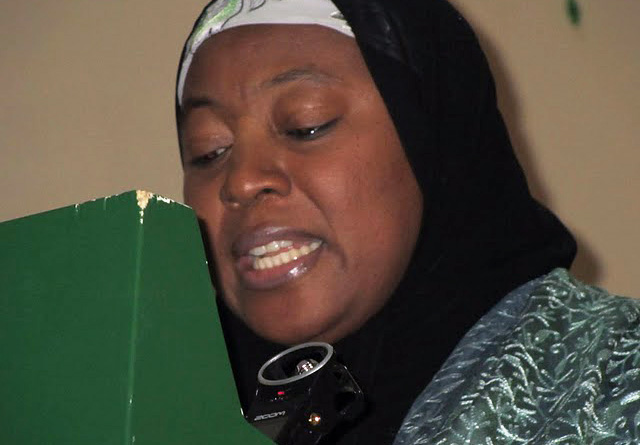 The wife of the Vice President, Hajiya Amina Sambo, has called on women to imbibe the use of Hijab (head scarf) and dress decently to underscore their chastity.

Sambo made the call in Abuja on Saturday at the maiden “World Hijab Day” in Nigeria organised by the Coalition of Nigerian Muslim Women.

“The essence of hijab is to promote the dignity of women in modesty, which had been the norm in history, up until the later part of the past century.

“Modesty is a component in several world religions, particularly in Judaism, Christianity and Islam.

“It may come as a surprise to many that it was not Islam that invented modesty or hijab; it existed in the laws of religions revealed before Islam’’, she said.

She added that it was very incumbent on Muslim women to use the hijab “because it’s a command from Allah.

“Muslim women are ordered by Allah to wear the hijab in order to cover the attractive dressing of the woman.

“This is for honour and to protect them rather than an act of oppression’’, she added.

She said the subject of Islamic dressing was very important for all Muslim women, especially the youths who were constantly faced with peer pressure and all sorts of indecency all in the name of fashion.

Sambo enjoined Muslim mothers to continue to teach and nurture their daughters and sisters on the proper mode of dressing that conforms with the dictates of Islam.

According to her, the hijab protects women from all forms of sexual harassment and abuse, especially in the kind of society we live in today.

She commended the organisers of the event and called for its replication in the 36 states of the federation.

Earlier, the wife of the FCT Minister, Hajia Aisha Mohammed, said that wearing hijab does not in any way stop one from being a professional.

Mohammed stressed the need for more enlightenment on the use of hijab, adding that the concept was mostly misunderstood by non-Muslims.

Khairat Gwadabe, as Mother of the day, said the use of hijab did not prevent her from being a politician and called on young women not to feel constrained with its use.

The event was attended by reverend sisters from the Catholic Women Centre who also pledged their support to the use of hijab and decent dressing by women.

Rev. Sister Agatha Chikelu said Catholics also use the hijab, although they call it “Habit”.

Chikelu said decent dressing was very key to the social re-engineering of Nigeria as a nation.

The event saw young and old Muslim women dressed in different shades of colours and sizes of hijab to the admiration of the audience. (NAN)