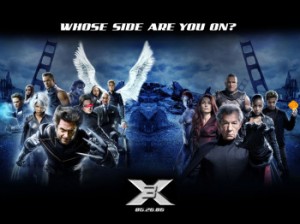 “X-Men” is not just about mutants with super powers, according to actor Ian McKellen. The superhero series also has a gay rights message.

During a Buzzfeed Brews interview, McKellen revealed he signed on to the “X-Men” movies, which first hit theaters back in 2000, after director Bryan Singer explained the deeper significance of the film.

“I was sold it by Bryan who said, ‘Mutants are like gays. They’re cast out by society for no good reason,’” he said. “And, as in all civil rights movements, they have to decide: Are they going to take the Xavier line — which is to somehow assimilate and stand up for yourself and be proud of what you are, but get on with everybody — or are you going to take the alternative view — which is, if necessary, use violence to stand up for your own rights. And that’s true. I’ve come across that division within the gay rights movement.”

Earlier this month, McKellen’s “X-Men” co-star Ellen Page, who plays Kitty Pryde (otherwise known as “Shadowcat”) in the films, came out as gay during a Human Rights Campaign event.

“I’m here today because I am gay,” she said on stage, “and because maybe I can make a difference. To help others have an easier and more hopeful time. Regardless, for me, I feel a personal obligation and a social responsibility.”

The 74-year-old actor is proud of Page.

“That gladdened by heart so much,” he said. McKellen and Page will both appear in the upcoming “X-Men: Days of Future Past.” The flick hits theaters May 23.