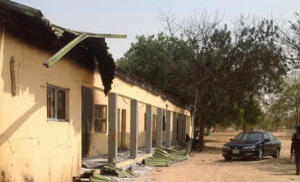 In a statement issued by his Chief Press Secretary, Paul Mumeh, in Abuja, the Senate President noted that the insurgents have no justification to kill students, who neither offended them nor committed any crime, saying that “even in war situations, children and women were always spared”.

Mark described the killings as an open declaration of war on Nigerians which he said cannot be justified.

Scores of students were gruesomely murdered as they slept in the hostels by gunmen believed to be members of the Boko Haram sect in the wee hours of Monday.

Mark said, “This open declaration of war on everybody especially defenseless students cannot be justified. This is inhuman, it is animalistic and barbaric. It is unthinkable that this is happening in Nigeria.

“It is also curious that under an emergency rule when security operatives should be on red alert. This mayhem still persists. Honestly, this calls for soul searching and I believe the security authorities must rise to this challenge”.

He commiserated with the government and people of Yobe State especially the families of the bereaved, saying that terror is not just national but a global threat that calls for bravery on the part of every one to confront.

The Senate President also condoled with the government and people of Benue State over the unabating killings in parts of the state on account of skirmishes between Fulani herdsmen and farmers.

No fewer than 10,000 persons are said to have been displaced in Benue as a result of the clashes, which has prompted Gov. Gabriel Suswam to appeal to the Federal Government to assist the state in flushing out the dangerously armed herdsmen.

Mark in the message to Mr Suswam, called for peaceful coexistence and good neighborliness.

He sympathized with the victims and urged security operatives to take appropriate measures to halt the trend in order to restore normalcy to the affected communities.