Nigeria’s Yoruba ethnic nationality today unanimously adopted its position to be presented at the proposed National Conference and stressed the need for unity among the Yoruba speaking people. 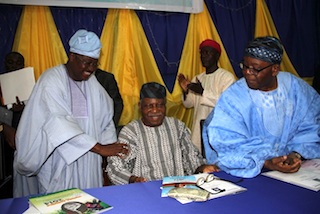 The position, which included regional autonomy within the united Nigerian federation, was arrived at the grand Yoruba Summit for formal presentation and verification of the Yoruba Agenda held at the House of Chiefs, Parliament Building, Ibadan, capital of Oyo State.

The ethnic nationality also demanded for a new Nigeria consisting of a central union and six regional governments, based on the current six geo-political zones, operating federal and regional constitutions respectively.

The agenda, according to the Coordinator of the summit, Gen. Alani Akinrinade (rtd.), would also request for a just and equitable taxation system that would make the federating units equal and coordinating at the federal level in order to eliminate the current rentier syndrome.

In view of the far-reaching fundamental reforms advocated in the agenda, the Yoruba also asked for the restructuring of the federation, system of government, security and defence which would lead to an autochthonous constitution, that is, a home-grown and all-inclusive draft that would only be submitted to the Nigerian electorate and be made to vote through referendum.

To take care of the interests of Yoruba minorities in Kogi, Kwara, Edo and Delta states and incorporate them to the mainstream, it was agreed that the Yoruba ethnic nationality may call for boundary adjustment, depending on the position of the experts that would work towards the final document.

Though, no list was announced as representatives of Yoruba at the National Conference, the gathering assured that only those who possess the mental capacity to marshal the positions would make the list.

Wale Osun, chairman, Afenifere Renewal Group, while endorsing the document, said it would be difficult for any Yoruba man who make the list of representatives at the conference to go against Yoruba interest, saying such person would not likely have the gut to return home.

Chairman, Presidential Advisory Committee on National Dialogue, Femi Okurounmu, advised state governors in the region to desist from sending separate positions from the one canvassed by the gathering to the conference.

Also speaking at the occasion, Governor Abiola Ajimobi urged the Yoruba to strongly canvass the return of the country to regionalism saying,

“We must ask that Nigeria becomes again a union of federated regions where each of us will be at liberty to restructure the current artificial state structure that we have.

The sub-set of this is that we must canvass a return of the regions of the federal union to their separate constitutions as was present in the 50’s and 60’s.”

According to the governor, there is also the need for the ethnic group to canvass that each of the regions should exercise control over their resources and only pay an agreed meager percentage to the federal government, adding that this way, the unbridled rat race for the centre and the parasitic approach to the government at the centre would be stopped.

He also advocated for a return to the regional policing system, adding that each region must be in control of its police apparatus while the armed forces that would make up the new Nigerian federation would be organized along strong regional commands.

In a 12-point resolution read by Gen. Akinrinade at the end of the summit, the ethnic nationality expressed preference for the Westminster model of Parliamentary System of government and fiscal federalism for the mobilization and management of the resources of the new union.

The Yoruba would also canvass for an appropriate budgetary provision that would be part of first line charge in the Federation Account for Lagos in view of its significance as the economic nerve centre of Nigeria as well as West African sub-region.

Part of the resolutions also was equal representation of each of the zones or regions in the composition of all judicial, legislative and executive institutions of the central government.