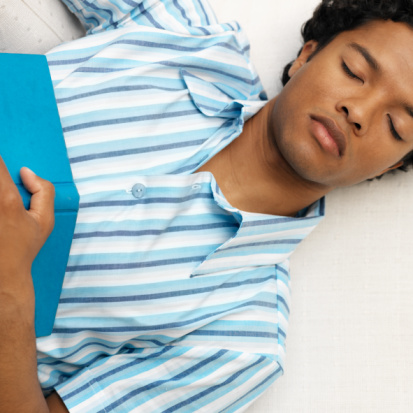 1.Paralyzes You
REM, which stands for “rapid eye movement” is the deepest phase of sleep. When you vividly recall a dream, it likely occurred during a REM cycle. In REM stages, muscles in our arms and legs are temporarily paralyzed while we sleep. This paralysis is normal, and it’s not same as sleep paralysis, which occurs for a few seconds or minutes after you awaken (or, rarely, just before you fall asleep). In this disorder, the normal paralysis that happens during sleep holds on for a few scary moments after you wake up. If you experience this, check with your physician; it could be a symptom of narcolepsy.
2. Jerks You Awake
It may feel like you’re falling or it may feel like you’ve been jolted awake, but hypnic jerks(sometimes called hypnagogic jerks) are a natural and common part of falling asleep. This phenomenon causes your limbs to jerk, perhaps because your body is preparing for the changes that take place during sleep, or perhaps because your body misinterprets the signs of impending sleep as falling–and thus jerks you in a misguided effort to stay upright. Scientists don’t agree on what exactly causes hypnic jerks, but they’re typically harmless.
3. Moves Your Eyes
As you sleep, you experience five phases of sleep, with REM as the last and most active phase. Once you complete a REM cycle, you’ll start the first phase anew. Seventy to 90 minutes after you fall asleep, you should be in REM sleep, and you’ll spend about 20 percent of your time sleeping in this stage. During REM sleep, our eyes dart quickly back and forth, but we typically have no memory of this (other than memories of dreams that often happen in this phase).
4. Produces Human Growth Hormone
Human growth hormone, or hgH, helps muscles, bone and other tissues regenerate. The helpful hormone is released during sleep, especially its deepest stages, and is thought to be prompted by low blood glucose levels present during sleep, among other factors. So, there is some science behind the concept of beauty sleep!
5. Narrows Your Throat
As you sleep, your breathing changes and your throat naturally narrows a bit as your muscles relax. If you’ve experienced a partner who snoresnoisily, you know what it sounds like when the throat becomes a bit too narrow. (Of course, snoring can have many causes, including a stuffy nose or tonsil issues.) Worse, the airway can close completely, causing sleep apnea.
6. Grinds Your Teeth
Bruxism (teeth clenching or grinding) happens to many people during sleep. It may be exacerbated by stress or a misaligned jaw, but research hasn’t pinpointed the reasonthat some people grind only rarely (or never), while others end up with cracked or worn teeth and sore jaw muscles.
7. Slows Down Your Kidneys
Kidneys normally function to filter toxins out of the bloodstream and to produce urine. As you sleep, the filtering action of these organs slows, so that less urine is produced. (That’s the reason your urine is usually so dark the first time you pee in the morning.)
8. Makes Up Stories
If you’ve awoken after a vivid dream, you know the vague unease of wondering if it was real–or why your mind produced that crazy mishmash of a story to begin with. Despite much research into dreaming and many hypotheses about why we dream and what dreams mean, the nuts and bolts of this everyday happening are still a mystery. Scientists have not yet figured out why we dream as we do, or found a proven process that would explain the content of our dreams.
9. Creates an Explosion
It’s rare, but some people who experience exploding head syndromehear a loud crash or bang, almost like a gunshot, just as they’re drifting off to sleep. It’s usually painless, but frightening, and tends to occur in adults over 50.
10. Turns You into a Chatterbox
It’s more common in children than adults and in men than women, but talking in your sleep happens to about 5 percent of us. Dubbed “somniloquy,” sleep talking is technically a sleep disorder, but may not bother you at all. In fact, you may not even realize you’re doing it. Like dreaming, somniloquy has yet to be explained, and can occur in any stage of sleep. When you’re sleeping lightly, your words will be easier to hear, and vice versa. Talking in your sleep can be sparked by episodes of stress, depression and illness, or occur alongside other sleep issues, such as sleep apnea.