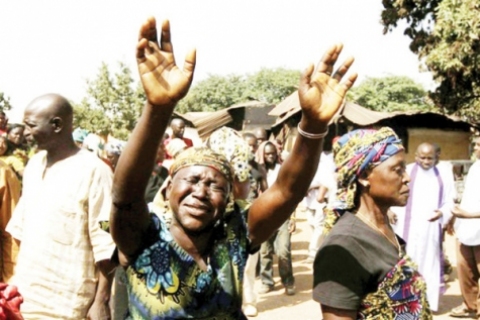 The attackers, it was learnt, invaded the three villages of Ungwar Sankwai, Ungwar Gata and Chenshyi on Friday night as the villagers slept.

The attackers burnt down houses, while villagers, who attempted to escape the inferno, were either felled by a hail of gunfire or macheted by the attackers numbering over 40.

One of the villagers, Nuhu Moses, who managed to escape from the scene of the attack said in one village alone no fewer than 50 people were killed.

He said, “The attackers were more than 40, armed with dangerous knives, guns and other sophisticated weapons.

“Over 50 people were killed in our village alone and there is no house standing. All the houses were burnt by the attackers while people who attempted to run were gunned down.

“I was just lucky to have escaped but our Pastor’s wife, and kids were among the people that were butchered”.

A resident of Ungwar Sankwai, Jonathan Bako, simply described his escape as a miracle.

The Kaduna State Command of the Nigeria Police Force, confirmed the incident.

The Police Public Relations Officer, Aminu Lawan, DSP, said a detachment of policemen had been deployed to the scene of the attack while investigations have begun to unravel those behind the dastardly act.

Vice Chairman of the council, Daniel Anyip, who stood in for the Chairman, Kumai Bodu, who is currently out of the country, also confirmed that several houses were torched in the attack.

He said women and children were not spared.

“There is no justification for this inhuman act”, Anyip said, adding that “From our records, in all the three villages attacked, only five houses are standing while people killed are about 100. These are villages that housed a lot of people but they are now homeless”.

Meanwhile, the State Governor, Mukhtar Yero, through his spokesman, Mallam Ahmed Maiyaki, has condemned the attack, describing it as “ungodly and barbaric”.

Yero, who vowed to bring the perpetrators to book, ordered a full scale investigation into the attack.

The Governor condoled with victims of the attacks and assured them of his administration’s commitment to protecting lives and property of the entire people of the state.

He also pleaded with people of the attacked communities to remain calm and law abiding as security operatives were already on top of the situation.

Yero said, “This ugly situation is unacceptable and we will step up efforts to improve surveillance and curtail future occurrence.

“We must not despair under this brazen attacks, as a leader, I am not happy with such ugly situations because it is my responsibility to ensure Security and safety for the entire people of the State”.