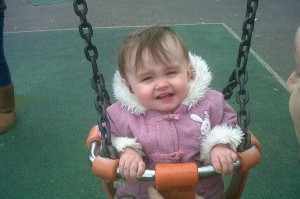 Police investigating the death of a toddler say she swallowed heroin substitute methadone.

Two-year-old Sophie Jones died after she was rushed to hospital by ambulance from her home.

Her parents, named locally as  Michelle King, 29,  and Barry Jones, 41, were charged in connection with the youngster’s death.

The drug, normally prescribed to drug addicts, is believed to have belonged to one of her family and police have found a drinking mug that they believe was used by the little girl.

It is understood the main line of inquiry by police is that Sophie was given a drink laced with the drug in a bid to keep her quiet.

It is green in colour and residue from from the mug is being examined by toxicology experts.

Details of the police investigation into the death of Sophie who has two older siblings were revealed in an application before District Judge Andrew Jebb sitting at Blackpool Magistrates’ Court.

Sophie lived in Jameson Street, Blackpool, and was taken to the town’s Victoria Hospital on Tuesday where she died.

It was confirmed that   Michelle King, 29, and Barry Jones, 41,  have both been charged with causing or allowing the death of a child by means of an unlawful act contrary to Section 5 of the Domestic Violence Crime and Victims Act 2004.

They have been remanded in custody and are due to appear at Blackpool Magistrates Court tomorrow.

Toxicology tests confirmed Sophie had swallowed methadone, however the cause of her death has still not been ascertained.