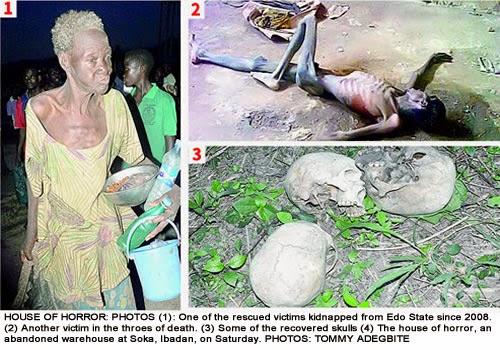 This is so alarming! Soka community in Ibadan, Oyo State turned to a Mecca of a sort on Saturday, when an abandoned property at Idi Mangoro area, suspected to be a kidnappers’ den, was discovered by some people who were looking for their missing family member, an okada rider.
Nigerian Tribune reports that the family stumbled on the building situated in an undeveloped part of the community, and went to check it out after hearing voices from there. And on entering the building, they met the shock of their lives. About 15 chained people, suspected to have been kidnapped, highly malnourished  were in the building, but by the time Sunday Tribune got there, only six of them – three males and three females were left.
One of them was looking like a skeleton and in the throes of death with his mouth hanging open while he groaned in pain as flies hovered around his mouth, nose and eyes.  Human bones were also found inside a well in front of the eight-room building said to belong to Ponti Construction Company. About six guns and several cutlasses were also recovered from the  house beside it said to belong to Black Horse Plastic factory.
Also, many shoes, bags, clothes and other accessories were found in two containers which stood beside the house while mobile numbers 08140574774 and 07038651723 with the name ’Friba’ and 08061197191 with the name ‘Koko Aram’ were also written on the inside wall of the building. 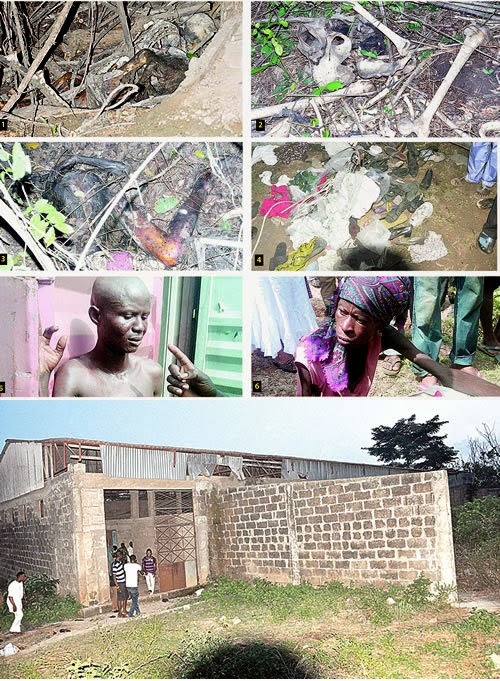 Identification cards with names such as Mr Rafiu Alamu (tanker driver) and national identity and First Bank ATM cards belonging to one Mrs Janet Motunrayo Lemo were also found at the scene.
Some of the inmates had run for dear lives immediately their chains were loosened, with one of them who claimed to have been an immigration official shouting with glee as he breathed air of freedom and ran away. One of the female inmates told Sunday Tribune that she was delivered of a baby on Friday and the baby was immediately taken away. Evidence of being a new mother could be seen as she had blood stains around her. Another inmate who gave his name as Tunji Alabi said he was a  conductor when he was abducted and brought to the house. He said he had  spent seven months.
As operatives of Operation Burst and policemen from Sanyo arrived at the scene, four men who claimed to be security guards were arrested from the building belonging to Black Horse. One of them who spoke with Sunday Tribune gave his name as Abideen Akanmu, saying that he was brought to the building by one Gbadamosi to watch over the house inmates. He further disclosed that Gbadamosi used to bring people who were dirty looking.

“We would bring them and shave their heads,” he disclosed.

However, a community member alleged that the security guards were just  disguising, labelling them as killers. Another member of the community who spoke anonymously told Sunday Tribune that he got a call from neighbours and:

“When I got there, I saw people who were like mad people but on a closer look, I saw that they were not really mad, but had gone through starvation. Some of them said they had been there for two years while others said seven months. I was told that some of them died from starvation. That was why I called the chairman of Oluyole Local Government, Prince Abass Alesinloye so that he could see things himself.”

“At about 10.45am, I received a call from a neighbour who intimated me of the discovery in our community. When I got there, I discovered that they were not mad people as they spoke Yoruba and English fluently. They were about 15. That prompted us to alert the local government chairman.”

Reacting to the story when contacted, the chairman of Oluyole Local Government, Prince Abass Alesinloye said he had already called the attention of the Special Adviser to the governor on Security Matters to the matter. That he had called security agents such as Operation Burst and Divisional Police Officer, Sanyo Division so that the place would be secured. The local government chairman also said he had made arrangement that the rescued victims be taken to the hospital for prompt medical attention.