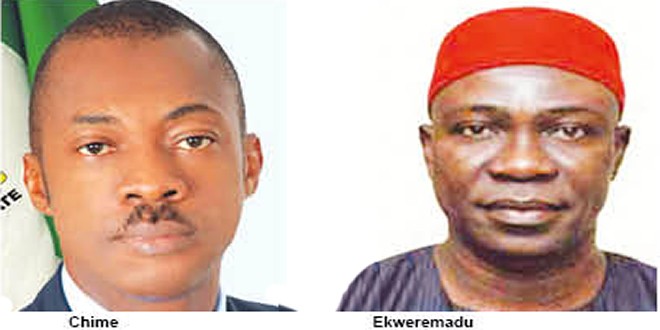 A statement by the community leaders, described as “regrettable” and “totally unacceptable”, attempts by some few people in the state to misrepresent the activities of the deputy senate president in the state.

They said the impression created “by hired politicians” that the Aninri people have adopted Enugu State Governor, Mr Sullivan Chime as the Peoples Democratic Party (PDP) candidate for Enugu West Senatorial District “is not only false, but also misleading”.

Ekweremadu is the senator representing Enugu West in the National Assembly.

The community leaders including Jonathan Ivoke (Okpanku community), Patrick Ikpenwa (Ndeabor Community), Chief David Orjinworie (Nenwe Community), Chief Gordi Ilegbu (Oduma Community), Desna Ajah (Mpu Community) and Charles Ajah (Okpanku Community), noted that “it is indeed sad that some group of political never-do-wells and thugs would make such declaration in the name of Aninri political stakeholders and leaders of thought when they are not”.

“The so-called stakeholders gave reasons why Chime should be the preferred candidate by alluding to the governor’s purported transformation agenda in terms of physical infrastructure, economic expansion and employment, rural development, service delivery and good governance.

“Unfortunately, they could not cite one project initiated and completed in Aninri Local Government by the Sullivan administration since its inception. The reason for not citing any project done by the governor in the local government is because there is nothing to cite.

“Conversely, we can name some major development projects attracted by Senator Ekweremadu to the communities of the political turncoats.

“For instance, the N12 billion Nenwe-Oduma-Uburu federal road project, attracted by Senator Ekweremadu, crossed the doorstep of the family compound of one of those spreading falsehood against Ekweremadu.

“His town is the first to enjoy the road and he can drive home during the rainy season.

“Previous governments told us the topography was impossible, and it would have remained the same for the next 100 years, but for Ekweremadu’s quality representation.

“With the completed Ndeabor-Mpu-Okpanku-Akaeze federal road project attracted by Senator Ekweremadu, one of them can now drive home at will, and even with his two eyes closed, if he so wishes”, the elders said.

According to them, “those behind the campaign of calumny against Ekweremadu fail to acknowledge that before the coming of Ikeoha, the local government was inaccessible due to bad roads worsened by a challenging topography.

“However, it is now on record that Senator Ekweremadu has, through his constituency projects, attracted over 37 projects to Aninri Local Government.

“Most of these projects have been completed, while others are nearing completion.

“These are not paper claims but are projects that can be verified.

“The emergence of Ekweremadu has changed the face of Aninri.

“The communities in Aninri have never had it good in the provision of democracy dividends. We stand to be challenged, just as we also challenge the so-called stakeholders to go to their village squares with the same false claims they dished out to mislead the people”.