The General Overseer of Mountain of Liberation and Miracle Ministry, aka Liberation City, Dr. Chris Okafor, in a recent interview with Encomium Weekly revealed that President Jonathan will again win the next election, and if he doesn’t that means he wasn’t called of God. 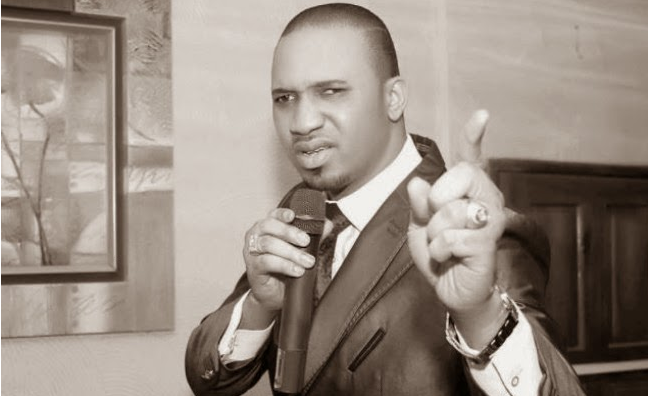 The funky man of God also referred to as ‘Oracle of God’ is known for his many predictions. Earlier this year Prophet (Dr) Chris Okafor predicted that there will be bloodshed in Nigeria. He also predicted last year the death of the mother of Ex-governor of Lagos state Bola Tinubu and that Boko Haram would soon be a thing of the past.

On predicting Jonathan will win the 2015 election?
God has been accurate. He is a progressive and creative God.  The Bible says every secret belongs to God, He reveals in order to redeem.  There were some prophesies that were  given during our cross over night and some are still coming. I remember vividly that God gave a revelation that the NUJ should pray against untimely death among its members and if possible they should come together to pray so that danger will be averted. But not too long, while we were praying, we heard one of their editors was killed.

There was a  prophesy about plane crash and few weeks ago, a plane crash was averted through prayer. I am not a prophet of doom. Do I prophesy evil? No! God reveals to redeem. But what is the essence of revealing it and not being heard? God spoke to me exclusively that the current president, Dr. Goodluck Jonathan will be Nigeria’s president after 2015 general elections.

God has already declared it to me. Mark what I said!  If it does not come to pass, know I’m not called of God. In the second term of President Goodluck Jonathan there will be a lot of transformation, despite battles from the opposition.

Then after Jonathan’s second term, the APC will take over.