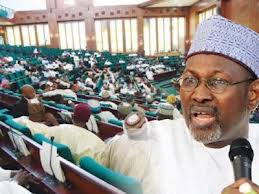 House of Representatives Speaker, Alhaji Aminu Waziri Tambuwal, and the chairman of the Independent Electoral Commission (INEC), Prof. Attahiru Jega, agreed that there was a shortfall of funding for the commission towards the 2015 general elections.

While Tambuwal said that there is a deficit of about N19 billion on the sum that the INEC needed to conduct free, fair and credible elections in 2015, Jega expressed frustration that “anytime we mention figures about how much it will cost for election, we are put on the defensive”.

Both the speaker and the INEC boss spoke in Ilorin, Kwara State, on Wednesday at a lecture on “Challenges of fraud-free election under democratic dispensation”, organised by the Mustapha Akanbi Foundation (MAF).

According to Tambuwal, INEC has requested N63.8 billion to enable it conduct proper elections in 2015.

The speaker however pointed out that “what we have presented before us as the total sum required by INEC, according to the Budget Office, is N45 billion whereas INEC itself is requesting about N63.8billion for the proper conduct of that election”.

“This is what INEC is seeking to conduct a free, fair and credible election. We have before us the proposal of N45bn instead of N63.8bn. Therefore there is a deficit of about N19bn. Unless and until we are able to meet up and give INEC as a government what is required, then we are about preparing…don’t read my body language”, he said.

“Now the 2014 Appropriation Bill is before the National Assembly, and, talking about a truly independent INEC, you need to fund the electoral body to be able to carry out its all-important assignment of conducting election”.

Tambuwal also calmed frayed nerves over fears that the 2015 election will divide the country, noting that “we have passed that”.

“Since 1999, it seems that every time we have an election coming, politicians and ethnic jingoists overheat the polity unnecessarily and cause a lot of tension and fear in the land. We must stop seeing everything as the end of our union.

“There is no doubt that the coming election will have critical bearing on the growth of our democracy. A fraud-free election is therefore a big step towards restoring people’s confidence in the electoral process and deepening democracy. It will also give conclusive proof of our ability to face the challenges of nation-building”.

Corroborating Tambuwal’s position on the funding of INEC, Jega said: “On the question of the budget, I must say it is a serious challenge. What the Budget Office presented as an envelope, we had a prior discussion before that envelope was brought to the National Assembly.

“As Mr Speaker rightly said, that budget was actually a fraction of what we need to conduct that election. If we have to keep on improving the integrity of the election, we also have to incur necessary expenditures in that process.

“And our requirements are far, far in excess of what is in the law. What keeps us optimistic is that, in 2011, both the National Assembly and the executive had seen the need to provide appropriate funding in order to do a good election and we are hopeful that this recognition now will be made and funding requirements would be provided.

“Anytime we mention figures about how much it will cost for election, we are put on the defensive. But since the honourable speaker has mentioned the figure, I am duty-bound to mention our figure.

“As I speak with you, when we saw the budget of N45bn and we are asked to now provide the details of how N45bn can be spent, in our engagement with the relevant authorities, we said, ‘Look, N45bn is not even sufficient for us to do necessary procurement between now and say November and to pay salaries and other entitlements of staff because all those are parts of this N45bn’.

“The procurement for purely electoral materials and electoral activities alone outside of payment of allowances is more than N45bn. So how can you get N45bn for the entire exercise? Like I said to you, when we had discussion with the Budget Office, we submitted the budget of N102bn and yet N45bn is what is submitted for us. We hope our engagement with government and the National Assembly will provide more funding for us to be able to do a good job”.

Jega, who reiterated his concerns about the security challenges in the country, expressed optimism that “things can improve to such an extent that we would be able to do our job without challenges”.