The war against Cyber crime otherwise known as yahoo yahoo, by security agents in Nigeria may take a long time to be won, if the confession of a 25-year-old alleged internet fraudster is anything to go by. 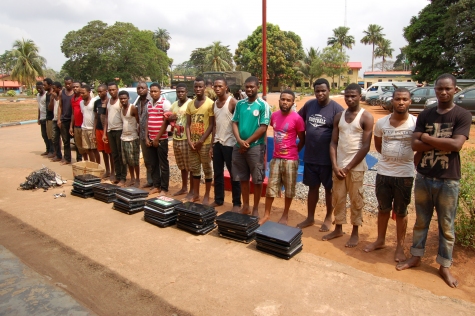 The suspect who simply gave his name as Chidi, disclosed that what people used to know as yahoo yahoo, a term used to defraud unsuspecting and gullible persons, especially foreigners, through the internet, has gone beyond mere conversation and emotional chat.

He disclosed that yahoo plus is the trend in cybercrime world today, as operators have resorted to using fetish means to  hypnotize their victims in order to get what they want from them.

In this interview with Crime Guard, Chidi said  he ventured into cyber crime eight  years ago, after several attempts to gain admission into the university failed.

Unfortunately, five years down the line, he said he could only get himself  a Nigerian used vehicle.

As you read this piece, Chidi said he had turned a new leaf, begging those he had defrauded to forgive him.

His sudden change of mind according to him, followed a startling discovery that human parts were being used to prepare concoction that would hypnotise victims.

Hear him: “ You may not believe me but it is true. Those who are into yahoo plus use charm to hypnotize their victims. This is because the ordinary yahoo no longer yield the desired result. Our targets are getting wiser and no longer fall prey .

“When I noticed that  I was not making any headway in yahoo business, I decided to inquire from some of my friends who were in same business but were living better off.

To my surprise, I was made to understand that the in-thing was yahoo plus. I decided to embark on a journey to Benin Republic in the company of  Chuks, Odinakachukwu and Chionye. There, we met a herbalist who told us to buy three live cocks and other items which he used to prepare some concoction for us. After that, we were asked to stand in front of the shrine,while  the herbalist chanted incantations that would enhance our success in yahoo plus.

“As we left for Nigeria, we were given some concoction which the herbalist said were prepared  with human parts. We were asked to put the concoction in  our mouths whenever we wanted to type or discuss with our victims.

But when I got home, I became restive. I remembered my mum’s admonition never to go into  anything fetish but to serve the almighty God. I kept the concoction away and watched as events unfolded.

Three months later, one of us Chuks, made 3000 dollars But Odinakachuckwu lost his younger brother who went to use his laptop. The instruction of the herbalist was that no one except him, should use his laptop. Just as we were smarting from that, Chionye lost his girlfriend.

“I decided to quit at that point because I did not want anyone to die on my account.  I am therefore  appealing to those I have defrauded through  yahoo yahoo to forgive me”, he stated.

When operatives of the Special Fraud Unit of the Nigeria Police were contacted, they described Chidi’s claim as untrue, saying the law does not believe in vodoo.

An operative who spoke on condition of anonymity said the Unit had arrested several internet fraudsters,with their loot refunded to victims.