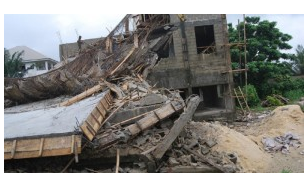 It was later learnt that the collapsed building belongs to the Managing Director of Peace Mass Transit Company, Mr. Sam Onyisi.

Speaking on the incident, manager of Peace Mass Transit in Nsukka, Mr. Godwin Mbah, said he was surprised when he received a called that one of the buildings of his boss under construction in Enugu road had collapsed.

“I quickly rushed to the place and it was true. My prayer is that those trapped will be rescued alive,” he said. Confirming the incident, Police Public Relations Officer, DSP Ebere Amarizu said investigation into the incident had commenced in order to ascertain the cause and number of casualties.

“Yes we have received the report of the collapsed of the 3-story building in Enugu road in Nsukka. We have commenced investigation to ascertain the cause and number of causalities,” said Amarizu