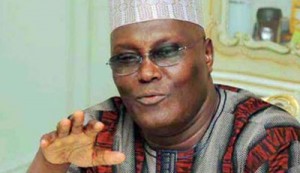 Former Vice President, Alhaji Abubakar Atiku, said, Monday, that the flag off of the construction of the second Niger Bridge by President Goodluck Jonathan was belated, “as the project ought to have been completed before now.”

Atiku stated this while delivering a keynote address at the 16th annual conference of African Council for Communication Education.

The conference was entitled “Communication, Children and the Youth in the 21stcentury,” and was hosted by the Department of Mass Communication, University of Nigeria, Nsukka.

At the time Atiku was speaking at Nsukka, President Jonathan was in Onitsha, Anambra State, flagging off the construction of the second Niger Bridge.

The former vice president, however, commended the President for eventually flagging off the construction of the second Niger Bridge after long years of wait.

He said that when completed, “the bridge would boost economic activities and transportation in the South-East zone and environs.”

In his address, Atiku urged participants at the ACCE conference to find solutions on how best to ensure that 10 million out-of-school children returned to school.

“The participants should also seek solution to the high rate of unemployment facing youths in the country,” he said.

He tasked the media on content that would promote the Nigerian economy, which, he said, has diverse sources of revenue and employment generation. “We don’t have to depend just on oil, but on agriculture, solid minerals, manufacturing and services”.

He said, “The media as an agenda setter should promote ideas for building the 21stcentury robust economy. You also have the responsibility to promote an education system mix of academic and vocational training, so as to cater for diverse needs of the youth and the emerging economy.”

Atiku, a presidential hopeful in the All Progressives Congress, advocated that federal schools be handed over to states in which they were located, saying, “It would help in administration and management of the schools.”

He added, “The Federal Government should also focus on setting regulatory standards and insist on implementing these standards.

“It will save cost as well as make it easier in management if federal schools were handed over to the states.”

The Vice Chancellor, University of Nigeria, Prof. Bartho Okolo, expressed appreciation to the former vice president for honoring the invitation.

Earlier, the Head, Department of Mass Communication in the institution, Dr. Ray Udeaja, explained that the aim of the conference was to continue to advance evolution of communication education in Africa as well as guarantee the dignity of young Africans in the coming days.

“We are aware of the faith our society reposes on those of us who are in the academics. This is why we organise such conferences as these to enable us contribute to sustainable development.

“This conference targets young Africans who are our successors on this planet,” he said.

Udeaja added that the ACCE 2013 annual conference held this year (2014) because of the protracted Academic Staff Union of Universities strike last year. [Vanguard]