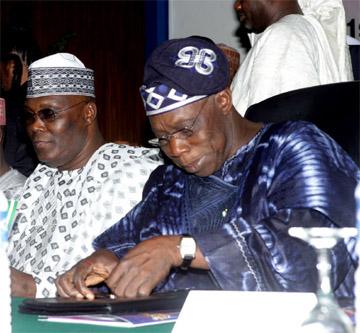 Former Vice President Atiku Abubakar has welcomed the olive branch extended to him by former President Olusegun Obasanjo and urged Nigerians to imbibe the spirit of forgiveness in the interest of national unity.

In a statement issued by his media office in Abuja Monday, Atiku said “forgiveness is divinely inspired and is an oil that lubricates the wheels of continued human interactions and engagements”.

The former Vice President commended Obasanjo, his “former boss for taking this bold and Godly step in the interest of the nation and humanity”.

Information Nigeria earlier reported that Obasanjo had while reacting to a request by the Northern Youth Leadership Forum, NYLF, on Sunday in Abeokuta, Ogun State, that he should forgive his former vice-president of whatever sin or offence he committed, said he had forgiven Atiku.

Obasanjo replied that though he had no grudge against anyone including Atiku, but quickly added that if there was any, “I have forgiven all as a father”.

According to Atiku, the process of national healing and reconciliation should advance to a new level and extend to other citizens of our great nation, who may have had grievances against one another.

He urged politicians to learn from the words of Mahatma Ghandi that an eye for an eye will make our nation go blind.

“When I made a similar effort few years ago, it was on the conviction that it would not be beneficial to me before Allah, if I went to the grave with bitterness. Let us forgive one another so that we can team up for national rebirth”, Atiku urged Nigerians.

He maintained that even if one disagrees with Obasanjo, no one would doubt his firm commitment to the unity of Nigeria.