A Los Angeles babysitter beat a 4-year-old girl to death and took the unresponsive infant to the hospital on a public bus instead of calling 911! 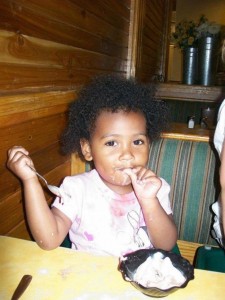 Vanessa Denise Hawkins Scott pleaded not guilty to the charges, according to the Los Angeles County District Attorney’s Office. She was being held on $1.1 million bail.

Prosecutors said Hawkins Scott was arrested last Friday after taking the unresponsive girl to Good Samaritan Hospital, where the child was pronounced dead.

The Los Angeles County coroner’s office said the girl died of blunt force trauma to the abdomen. The girl, identified as Mya Migneault, and her mother were visiting from Florida, family members said.

The Los Angeles Police Department is currently investigating the case.

Hawkins Scott is set to return to court April 7 for a preliminary hearing to determine if there is enough evidence to require her to stand trial.

If convicted, she faces up to life in prison, prosecutors said.

What are your thoughts?