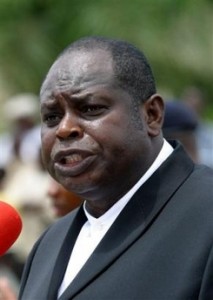 Bayelsa State Government has requested the Economic and Financial Crimes Commission (EFCC) to remit to it the sum of N1.4 Billion and another 1.3 million USD recovered from a former governor of the state, Diepreye Alamieyeseigha‎.

The state has therefore engaged the services of the Chief Executive of Panic Alert Security System, Mr George Uboh to help it recover the money from the anti-graft agency.

Uboh therefore wrote to the EFCC requesting for the monies to be paid to him within 7 days following which the commission requested him to meet with its staff on 19th December, 2013.

Uboh said that he met with EFCC and the commission asked him for a short time to ‎comply.

He said that as at the beginning of this month, the commission had yet to remit the monies and that the state had instructed that a suit be filed against the commission to recover the monies.

Diepreye Alamieyeseigha was detained in London on charges of money laundering in September 2005. At the time of his arrest, Metropolitan police found about £1m in cash in his London home. Later they found a total of £1.8m ($3.2m) in cash and bank accounts. He has been found to own real estate in London worth an alleged £10 million. He bought many properties in the US and London from proceeds of corruption, paying £1.75 million cash for one of them in July 2003.