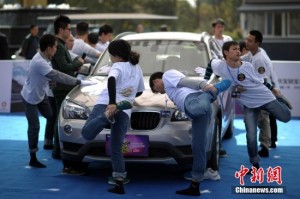 Wu Deqi is the proud owner of a brand new swanky BMW. Nothing special so far, I know, but that’s because you don’t yet know how he got it. Instead of money, he had to pay for it with a lot of pain. In a promotional contest held last Sunday in the Shapingba District of Southwest China, Wu stood on one leg with one hand touching the coveted car alongside 20 other participants. After a grueling 7 hours and 26 minutes, Wu was the last man standing – automatically winning possession of the 300,000 yuan BMW X1.

Of course, Wu’s feat is nowhere near the Guinness World Record for standing on one leg. That distinction belongs to Suresh Joachim, who balanced himself on one foot for a whopping 76 hours and 40 minutes. But you have to hand it to Wu for his extraordinary effort. I mean, I couldn’t do it for over 5 minutes even if they offered me two BMWs.

The actual event began on 1 March and attracted hundreds of participants. About 140 people entered into three elimination rounds, and 20 shortlisted candidates made it to the final competition on Sunday. This last round was the toughest; some of the contestants actually dropped to the ground in agony. The competition began at 9:30 am and by 1:30 pm, the going got really tough. That’s when the organizers asked participants to stand on tip of their support foot. Flour was spread under each person’s foot to make sure they didn’t cheat and rest their heels.

To be honest, that sounds quite brutal. You can even see the excruciating pain on some of the contestant’s faces in the pictures. But then I suppose you don’t get the chance to win a new supercar every day, so all that pain is worth it, right?