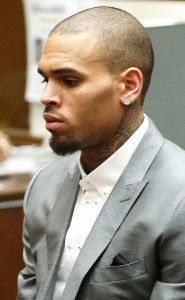 Rehab might be looking pretty good to Chris Brown right about now but the embattled artist was remanded to custody pending a previously scheduled probation violation hearing on April 23, E! News confirms.

He was arrested Friday after reportedly being kicked out of the residential treatment facility where he had been staying.

A warrant had immediately been issued for his arrest because he was legally not allowed to leave rehab. Brown’s mother, Joyce Hawkins, started sobbing after hearing her son being ordered back to jail.

Attorney Mark Geragos whispered into Hawkins’ ear, seemingly in an attempt to console her

Brown, wearing a county-issued orange jumpsuit, was in shackles when he was led into court today, a request by Geragos to let his client wear civilian clothes in the face of all the cameras having been denied. On Friday, the probation department submitted a three-page report outlining the ways in which Brown had violated program rules and was not compliant with the program.

Reported fractions included making a “provocative statement” during a morning reflection class (allegedly boasting, “I’m good with guns and knives”), touching elbows/standing close to a female client and issues concerning a drug test. Deeming Brown “troubled,” L.A. County Superior Court James Brandlin, who has been overseeing Brown’s recent back-and-forth with the court, sent him back to the slammer without bail despite Geragos’ insistence to the court that holding the singer is a “waste of judicial resources.”

The attorney argued that Brown should be housed in an off-site facility, not jail. Before his April 23 hearing, meanwhile, a trial date of April 17 is set for Brown’s misdemeanor assault case in Washington, D.C. He previously refused a plea deal because, as his attorney back east put it, he was not guilty of the crime.

The felony probation violation charge Brown is facing in L.A. regards the five years of probation he was sentenced to in 2009 for assaulting Rihanna.